This year’s Thanksgiving dinner took place at my parent’s house, with five couples who are most important in my life: my parents; my parents-in-law; my sister and her boyfriend; me and Kevin; and Audrey and Minnie (the house dog). I didn’t want my mother to tire herself out by cooking such a large meal, so I volunteered to cook the meal for everyone this year, with my mother setting the table, my in-laws bringing the dessert and my sister bringing the wines. I was the official catering lady of the evening, with disposable tin containers and all!

Since I was transporting the food and they were destined to get cold, I decided to prepare everything the night before (except for turkey) and store them in the fridge until we were ready to hit the road. I’m glad I did this because I was able to just relax and play with the kid during the day, completely stress free!

It took me about four hours total to prepare the stuffing, mashed potatoes, roasted root vegetables, braised red cabbage, and Greek salad. Kevin whipped up the haricot vert at the parent’s house right before all the guests arrived.

I also prepared a charcuterie plate (not pictured), with prosciutto, salami, smoked salmon, and some goat cheese, brie, and colby jack, with cucumber slices and assorted crackers. My in-laws brought giant pumpkin pie and apple pie (and whip cream!) what were heavenly.

I think everything turned out pretty decent, but I must admit that I’ve cooked a better Thanksgiving meals before.

Here’s the menu for the evening!  Each recipe makes enough to fill the 9 x 9 pans.

It takes about 4 hours per pound to defrost the turkey in the refrigerator, and it takes 20 minutes per pound to roast the bird in the oven. As long you know these two things, you’re good to go! We roasted two, 13 pounds turkeys this year to feed 9 people. It turned out that that was WAY too much, since 4 out of 9 were our parents with small appetites, and another one was a toddler. We only got through one, and everyone took pieces from the other one home.

Pat the turkey with paper towel to dry. Take out all the giblets out of the caucus. Rub the turkey with a mixture of finely chopped rosemary and thyme, grated garlic, salt and pepper, and olive oil. Place the turkey on a roasting pan and roast the turkey in a 375 degree F oven for about 4 hours, or until the internal temperature reaches 165 degree F. Take out the turkey every hour and baste the skin with the mixture or the dripping from the bottom of the pan. Make sure to do this quickly to maintain the oven temperature.

Chop 2 heads of red cabbage into half inch strips. In a very large pot, sauté the cabbage in olive oil until slightly wilted, about 10 minutes. Add sliced apples (2 medium – I used Fuji for its tang and crispy texture) and sauté for another 5 minutes. Add 2 cups apple cider vinegar, ¼ cup maple syrup, sprinkle salt and pepper to taste, and cook until the cabbage and apples are completely wilted. Add dill for garnish. Serve hot or cold. Personally, I love letting this sit overnight and serve it cold.

Boil about 2 pounds of haricot vert in a large pot of boiling water for about 3 minutes, take care not to overcook (This is optional. You can do all the cooking in the pan. Boiling them first speed up the cooking process). Drain the beans and add them to a large frying pan. Sauté them in olive oil, in medium high meat, until you reach the desired consistency. We like ours slightly crunchy so we don’t overcook it. Add ¼ cup white wine, 1 tablespoon butter, salt and pepper to taste, and cook until the liquid evaporates. Add ¼ cup lemon juice, ¼ cup almond slices and toss. Garnish the plate with lemon wedges.

Chop 5 medium size unpeeled red potatoes (more, if you’re using the small ones), 2 large onions, and one head of cauliflower into bite size, and add them in a large roasting pan. Also add one bag of ready-to-eat baby carrots and 5 cloves of peeled garlic to the pan. Toss the vegetables in ¼ cup olive oil, making sure that each vegetable is well coated with oil. Sprinkle salt and pepper to taste. Bake in 375 degree F oven for about one hour, or until the veggies are tender. Stir occasionally to prevent burning.

Peel and cut 10 Russet potatoes and add them in a pot of cold water. Bring the water to a boil in high heat and cook the potatoes until fork tender. Drain the water and return the potatoes in the same pot. Using the handheld blender, mash the potatoes until smooth (I like mine a little lumpy so I went easy with the blending). Add 1-1/2 cups milk, 10 grated garlic, finely-chopped rosemary and thyme, slat and pepper to taste, and cook in medium heat until fluffy. Do not over mix, as doing so will turn the potatoes into a paste.  Garnish with herbs. 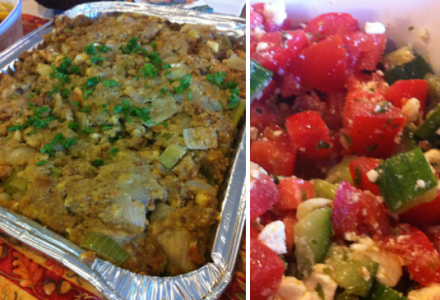 I used the boxed stuffing this year! I just sauted 2 large onions, 10 stalks of celery, and 5 cloves of chopped garlic in a large pan.  I added, to the vegetables, 3 boxes of cornbread stuffing mix and poured in 2 boxes of vegetable broths. I’m actually not too crazy about cornbread stuffing but Kevin insisted on his favorite so I compromised, like a good wife that I am.

Chop 10 medium size tomatoes into cubes. You don’t need to remove the seeds. Half one large English cucumber lengthwise and scrape out the seeds from the middle. Chop the cucumber into bite-size cubes. Toss the tomato and cucumber cubes in a large bowl. Add 5 cloves of grated garlic, ½ cup olive oil, crumbled feta cheese, handful of finely chopped parsley, salt and pepper to taste, and toss. Cover and let the salad sit in a refrigerator overnight.

My mother- and father-in-laws made these two lovely dishes – pumpkin salad (like potato salad but with pumpkin) and roasted Brussels sprouts! These two were probably my favorite dishes of the night!

I hope you all have a wonderful Thanksgiving!