I have decided to combine my two obsessions – making short videos and dining out – and create a video series called “One Minute Gourmet.”

Each video will feature my dining experience, with footage of the restaurant interior, what I ordered, etc., in 60 seconds or less. It won’t be anything fancy but I hope you enjoy it!

Episode 1 features Huckleberry Cafe in Santa Monica. I wrote about the cafe back in 2011 and I still adore this place, four years later.  My favorite dish here is Lentil Ragu.  It’s pretty amazing, especially topped with its homemade hot sauce.

Without further ado, here’s the video!

Kevin and I watched Entourage (movie) earlier this summer. We used to be into the HBO show, aka Sex and the City for men, at one point in our lives but we lost interest at around Season 4 and we stopped watching it altogether.

We went to the movie anyway because we had gift certificates to iPic Theatre in Old Town Pasadena and it seemed like this was the kind of movie that we can watch care free, like, if we fall a sleep, we don’t have to kick ourselves afterward. The movie didn’t receive a raving review from the critic but I thought it was fun, and it was a nice way to catch up with our old buddies on the silver screen. It was also nice to see a cameo appearance by the Los Angeles Kings players, although I suspect that noone but Kings fans recognized them.

After we watched the film, Kevin and I decided to catch up on the rest of the TV show, so we purchased the remaining seasons on Amazon Prime and binge watched all the episodes that we had missed (which, by the way, became available for free on Amazon Prime Instant Video only a few weeks after we paid a pretty penny for each missed season.

One thing I noticed while salivating over Ari’s super hotness was how much those boys loved Urth Café! They frequented this organic coffee and tea house so much that it should have been the fifth character in the show. Well, the product placement totally worked because I’ve made a trip or two (well, four, but who’s counting?) to its Pasadena location in the last few months alone.  Here are the pictures from my last outing — Green Tea Latte and Egg Salmone.

And here are some from the other outing: 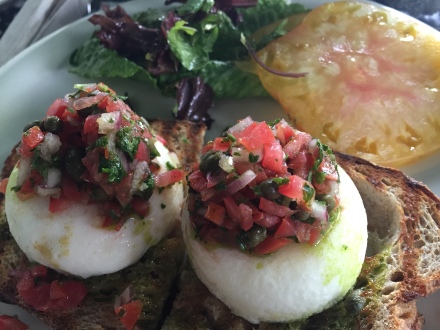 Darn you boys!  This place is amazing but it ain’t cheap!