The movie, “Something Borrowed,” got me interested in Shake Shack. Then I started reading all the raving reviews about the burger shop on the Web and got even more intrigued.  I’m not much of a hamburger person, but I am a culinary ambulance chaser, so naturally, I felt the need to try it and see what the hype was all about myself.

Yet the last two times I was in NYC, I was a pseudo-vegetarian, so I had to forgo the opportunity to decipher the mystery behind a hamburger and frozen custards that seem to bedazzle the entire island of Manhattan. (I go through the “I ain’t gonna eat no meat no mo” phase probably twice a year, which lasts about a month each time, and they somehow always landed on days I traveled to NYC.)

I walked by Shake Shack on Madison Square Park on several occasions but never got in a (long) line for the famous hamburger. These photos were taken during my trip two years ago, while I slide glanced the patrons enjoying the juicy burger with envy.

This time around, I was committed to trying the burger, once and for all.  Maya and I went over to the original Madison Square Park location hungry and ready to grub on a Sunday afternoon (we even walked 30-some blocks from our hotel in Midtown East to work up our appetite) only to find that the tiny shack that stood in the middle of the petit park was temporary closed for renovation!  What the #$@!##%*&#!

Well, when life throws you a lemon, you go for lemon gelato, right? 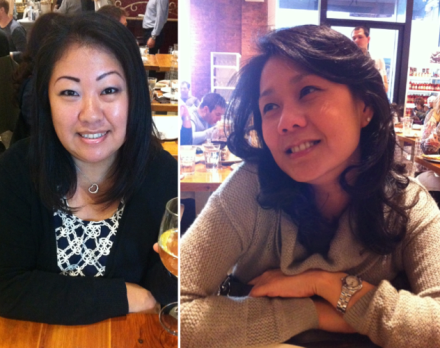 We were a little too hungry and annoyed to go over to its other locations so we decided to eat at Eataly across the street instead.  We were bummed about Shake Shack but weren’t complaining too much about the unexpected change of plan because Eataly is pretty awesome, evident from my previous posts here and here.  Yes, we like this place a lot.

One look at this lovely charcuterie plate (SALUMI MISTI: An Assortment of Artisanal Salumi) and we were saying, “Shake who?” 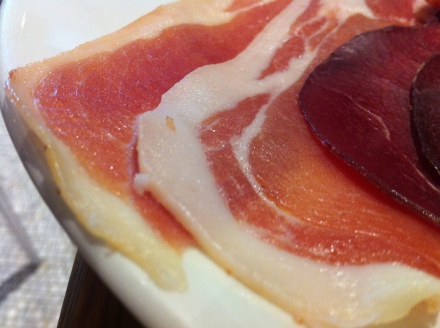 These are melt-in-your-mouth goodness.

TAGLIATELLE al Ragù di Manzo: Housemade Tagliatelle with Short Rib Ragù and Parmigiano Reggiano® for me. This was amazing.  We finished our amazing lunch with a few delicious scoops of gelato.

You might think our day ended with this, but not so fast. We actually did make it out Shake Shack later that night.

We got to go to the one in Time Square, after watching Gigi on Broadway, which, I’m sorry to say, was pretty awful. I thought the actual performance was good but the dialogues were way too long and often pointless, and the story itself was a blah. The theatre was empty so at least we got to move down quite a bit from our original, nose-bleed seats to get our money’s worth. 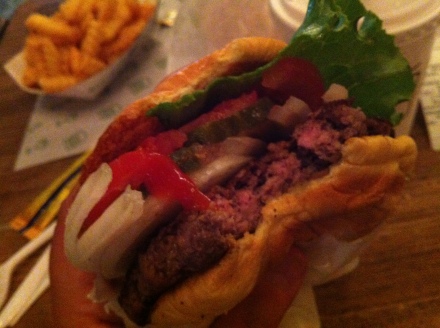 Shake Shack was a mad house, even at 11:00 p.m., packed with tourists and locals alike. The line went out the door but it only took a few minutes to get to the front.  Maya spotted an actor in line (I forgot who she said it was), which was very New York!

I ordered the single Hamburger. I guess when you order the hamburger here, you can’t assume that it automatically comes with the usual lettuce, tomato, pickles and onion. Instead, you have to ask for them specifically, otherwise you’ll get a burger just with a beef patty and two buns.  Not knowing this, I ordered mine with extra raw onion (which I always do when ordering burgers) and the guy thought I only wanted a burger with, well, onion slices. Good thing I clarified it with the cashier beforehand or I would have been super disappointed.

Well, speaking of being disappointed, I must admit that I was a bit confused. The hamburger was decent, but mediocre at best.  Even after eating two (don’t judge — I was hungry), I couldn’t understand what all the buzz was about.  I thought In-N-Out was 3,425,462 times better and burgers from other shops, like Counters and Umami, were much juicier and flavorful than then the ones I bit into here.

Perhaps we are too spoiled with so many gourmet burger options in LA and PDX? I don’t know for sure, but you can be the judge if you’re an Angeleno, because Shake Shack is coming to West Los Angeles in 2016.

One thought on “I Wasn’t Shaken to the Core”