I’ve been pursuing the best recipe for banana and other autumn-inspired bread loaf lately, hoping to concoct the best combination of spice and fruits / veggies to create the fluffiest loaf fit for this beautiful fall weather. I’m open to any combination, as long as the loaves do not contain white flour, white sugar and butter. I would like to someday create a recipe that are completely plant-based (no eggs) and oil free (perhaps replace the oil with apple sauce) but I’ll settle for the hybrid version of the old classic for now. 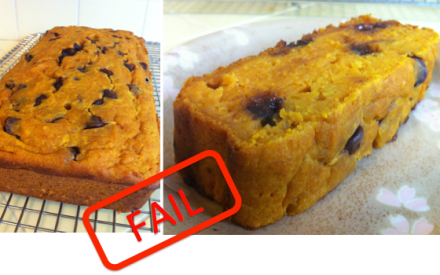 I have a go-to banana bread recipe that I’m very happy with. It gives me wonderful results every time, so of course my logic is that if I substitute the mashed bananas with pureed pumpkin, I’ll be able to recreate the same, amazing result, right?

That would be too easy.

The loaf came out more pumpkin pie filling than pumpkin bread, and since pumpkin puree doesn’t have the same sweetness ripe bananas naturally bring, the loaf lacked the cloying punch. Unfortunately, even the generous amount of chocolate chips weren’t enough to emulate the dessert-like sweetness. It wasn’t at all terrible and a big red “fail” stamp might be a little too harsh but this recipe definitely needs some fine-tuning.

I go nuts for zucchini walnut breads. I still remember the first time I bit into one from Starbucks, which went ridiculously well with my cup of café soy misto during the long commute on the 101 freeway. It was incredible, but as in all good things, I had to bid farewell to it when I discovered that the seemingly innocent-looking muffin contained 28 grams of fat and 52 grams of carbohydrate (28 of them sugar).  The muffin has been discontinued since, by the way.

Anyway, my attempt to recreate my favorite loaf, bread, muffin, or whatever, was a big fat fail as well. I played around with flour to make it denser and increased the amount of maple syrup, etc. but the result wasn’t as extraordinary as the ones I remembered from the mega coffee joint. I’m really going to need to study up on the science of baking so I’ll be able to create the fool-proof version of this yummy delight!  But I’ll get there.

It’s true what they say – third time’s a charm!

I just made some small tweaks to an already-delicious banana bread recipe, but those little things made a huge different in the finished loaf. I might have perfected the recipe for the best banana bread!

Here’s the 2.0 version of the banana bread (See other posts on banana breads here and here).

The changes I made from the original recipe are: