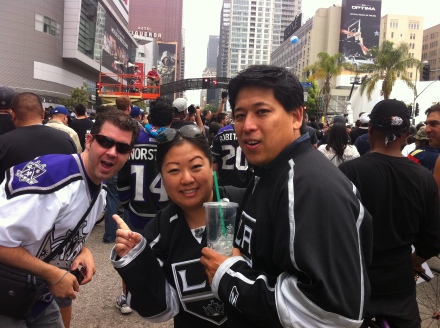 In 2001, a friend took me to my first hockey game at Staple Center and I fell absolutely in love with the sport and the team! It wasn’t all roses for many years when there were way more losses than wins. There were so many empty promises and disappointments throughout the years, but the young core players started developing and we started to see the glimpse of light at the end of the tunnel, especially when we finally began making the push for playoffs.

I knew this year’s team was a true contender but I never, in my wildest dream, thought that we will be hoisting the Stanley Cup in June.

But what do I know — we bulldozed over all the opponents we faced in the playoffs and broke a bunch of records along the way!  Talk about winning in style!

After watching the winning moments over and over again, reading about it on papers, watching the players appear on nightly talk shows (here, here, and here), and even cheering at the victory parade, I still feel like I’m dreaming. I think this feeling will last for a very long time.

You can see Bailey with the flag! 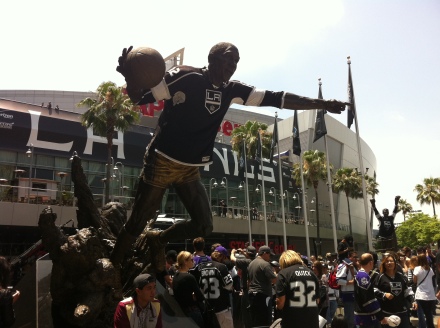 Even Magic sported the Black and White!

Inside the rally at Staple Center!

We were so happy to witness history! 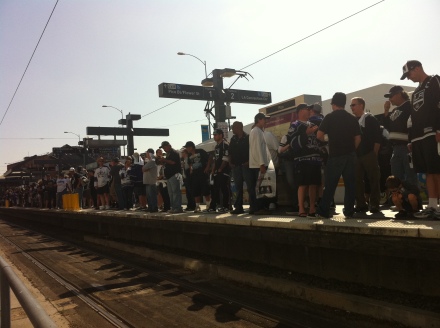 Kerry, Carmela, and I took the metro from North Hollywood to Staple Center (while Kevin walked from his office).  We initially met up at the Universal City station but there were absolutely no places to park, so we drove 2 miles to the nearest NoHo stop.  There were no spaces there either but we got lucky and found spaces on the streets.  It was great to see a bunch of energetic Kings fan on the way, to start the celebration early!

I feel so lucky that my time off request was granted … I bet you 249,999 people that were at the parade this afternoon all played hooky from work!

You can watch the entire footage of the rally here!

And special thanks to Carmela for finding us in the crowd (at around 36 minutes and 10 seconds into the video, during Brownie’s speech)! We got on TV, baby!

One thought on “The Stanley Cup Parade and Rally!”