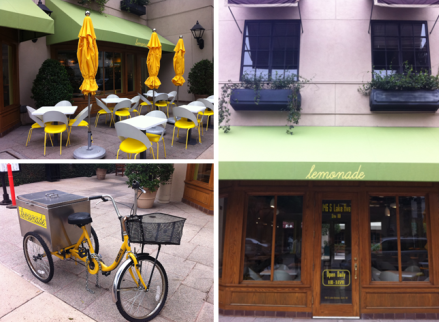 The month of September is all about a fresh beginning. For students, it’s time to stock up on No. 2 pencils and Pee Chee folders for the new school year, and for us adults, it’s all about new fall dramas on television.  So far I’ve watched Revenge, Pan Am, Charlie’s Angels and The Playboy Club online … and I must say that Revenge was my favorite, although I’m not too certain any of them will last for more than one season.

Along with all things new, my fiance and I discovered a new kid in the Pasadena culinary block over the weekend while searching for a good lunch place! Lemonade, a casual eatery that describes itself as “part lemonade stand, part grade-school cafeteria” opened on South Lake Avenue next to Billy (aka William Sonoma) several weeks ago and it already shows the true promise of becoming one of the most popular kids in the neighborhood.

Lemonade is not new for everyone, with various locations already in the Los Angeles area (in fact, my fiance frequents the one in Downtown LA near his work), but it was my first time visiting the place.

In the true school cafeteria fashion, there are plastic trays stacked at the beginning of a line for you to take while you make your selection from about 30 colorful array of prepared “marketplace” food like Israeli couscous and heirloom tomato salad.  There are also “Braises” like Red Miso Short Ribs and Beef Stroganoff available that sit orderly in individual Le Creuset Dutch ovens. There are sandwiches, soups, salads, and desserts available as well.

It was a bit tricky to figure out the ordering process at first, and it brought back the bitter memory of my first attempt at ordering food in an elementary school cafeteria when I spoke no words of English. Luckily, pointing is a universal language and it still worked here like it did for me in the mid-80s. If you want to try the “marketplace” items, simply decide how many “portion” of it you want. Its portion is pretty generous (about a heaping cup), and you can split a portion into two so you can try more variety. 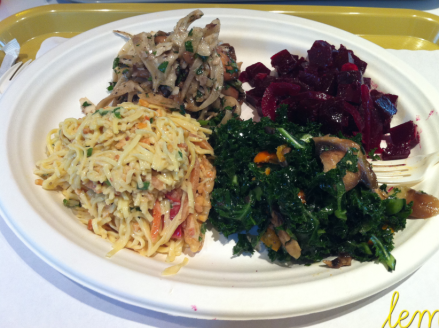 I split two portions and ended up with (clockwise): beets with pickled onion and hazelnut dressing; Kale salad; drunken soy chicken with soba noodle, peanut, and creamy sesame; and shaved fennel with mushroom, pecorino, and lemon. 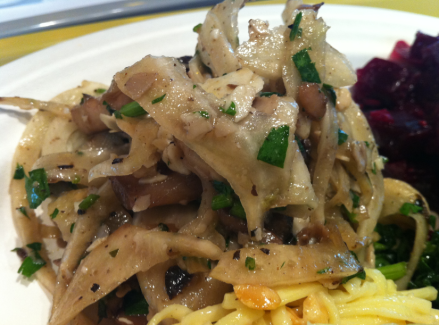 My favorite was the shaved fennel that married the wonderful flavors and textures of crunchy liquoricey bulbs, slightly tangy of mushrooms, and salty pecorino cheese. All items reminded me of the lovely M Chaya Café! I can’t wait to replicate this at home. 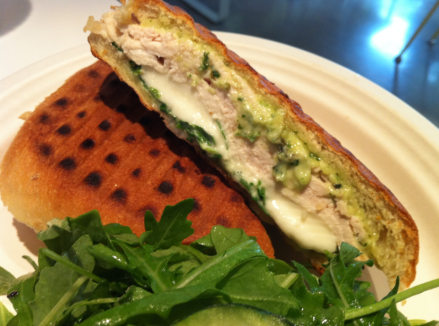 My fiancé ordered a Harissa chicken, avocado, manchego, picked onion Panini sandwich, with a side of simple arugula salad, which were super delicious!  The bread was a little on the dry side but the juicy chicken breasts and a generous portion of manchego cheese more than compensated for it.

And of course, you can’t forget the restaurant’s namesake drink when you’re here. There are unique lemonade flavors like watermelon rosemary and cucumber mint, along with traditional ones like Arnold Palmer. I tried the blueberry mint flavor which was a little too sweet for me (it was Chick-Fil-A sweet) but was still delicious nonetheless. The Blood Orange lemonade my fiancé ordered was a little less sweet and much more refreshing.

Staring out something new can be stressful at times but I’m comforted to know that I found a nice place to sit for lunch from now.