I like the idea of a mini-trip within a trip, like how Liz Gilbert ran off to Naples during her three-month stay in Rome in the book, Eat Pray Love (by the way, I just recently watched the movie version and thought it was awful). Europe is the best place to do this because all the countries are only an airplane or train ride away. Going to London from Paris is as easy as going to Las Vegas from Los Angeles!

Maya and I had decided to spend two days in London when we were planning the Paris trip because it was only a little over two hours on Eurostar, a train that runs to and from Paris, London, Brussels, and other nearby European cities. It was also because Maya had not been there before. I don’t think we were particularly looking for specific things to do or see (although a glimpse of Nigella Lawson, Jamie Oliver, Robert Irvine, or Price William would have been nice), but we knew that we would enjoy a little getaway within a getaway!

On Sunday, Maya’s third day on this vacation, we woke up early to catch the train departing from the Paris Gare du Nord station at 8:00 a.m. We woke up at 6:00 a.m. (well, Maya did – I was still a sleep!), got ready, stopped by Gerard Mulot to pick up croissants for breakfast, and headed to the station (we took the Metro 4 going toward Porte d’Orlean from Odeon to Gare du Nord). During the train ride to Nord, we realized that we were, in fact, traveling to a different country and perhaps we should have treated this Eurostar ride like an international flight. Lo and behold, the itinerary stated that it is recommended that passengers arrive at least 45 minutes before the departure – and it was already 7:45 a.m., 15 minutes to departure!

Once we arrived to Gare de Nord, we ran to the Eurostar terminal, conveniently located on the other side of this humongous train station. We found a place to collect our tickets at the will call office (yes, I know that the train is leaving in 3 minutes, thank you), and quickly grabbed out tickets to go in the gate. Maya went in first. No problem. But when I inserted the ticket into the machine that will let me through … nothing. WHAT? It turned out that the last call for all passengers ended with Maya and I had missed my train by a second. EEEEEK.

Well, it turned out that there was another train leaving Paris in an hour and we were both placed in the train with no additional charge. We now had enough time to go through Custom (it felt like the place suddenly transformed from Paris to London as all Custom officers were British, apparent by their constant usage of the term “cheers”) and sit down for a cup of coffee before boarding. It all worked out for us, but you can just imaging the stress I went through at that moment, and it wasn’t even 8:00 a.m. yet!  Thank goodness Maya is seriously the most calm and drama-free person I know. 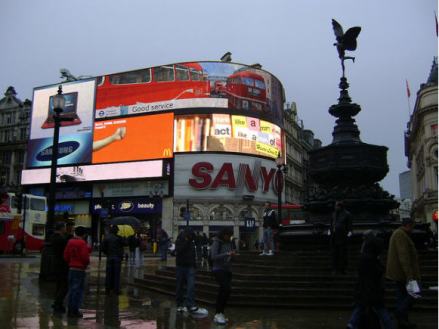 After an incredibly pleasant 2.5 hours train ride, we were in London!  YAY!  We were a little relieved that we can now speak English without feeling guilty and we understood all the signs (although “exit” was called “way out). We checked into the hotel that Maya arranged for us, and headed over to Piccadilly Circus to see if we can score some tickets to the West End show for the night.

It was a short hop on Underground from our hotel to perhaps the most recognizable square in London with bright, bright lights. After snapping several pictures — Asian tourist style — we headed to Queens Threatre to see if Les Miserable tickets are still available (I am addicted to this show). It turned out that it was all sold out for the night, and pretty much all the shows on West End were dark on Sundays. Slightly disappointed, we decided to grab lunch at a nearby sushi restaurant.

Yo! Sushi is a chain revolving sushi restaurant with uber modern design. I had seen and heard about this trendy eatery when I was here last and I was curious to check out what the hype was all about. It was also a great way to rest our feet (mine were killing me at this point) and eat rice and soy sauce. I’m so Japanese – after days of eating French food, my body was craving the Japanese flavors pretty badly.

Turned out, that food at Yo! Sushi was the worst food I’ve ever had, not just for sushi, but, like, ever. The fish weren’t fresh, and the sushi rice is rolled in a machine! I should have expected it since London is not known for food (I remember having the worst fish and chips in London before) but I was still surprised at how terrible they were. But after a glass of wine, I felt giddy enough to find humor in it. It cost us an arm and a leg for this yucky food but we wrote it off as an experience!

After lunch, we went to Oxford Circus to pay respect to my shrine – Liberty of London – the home of all the fabrics that I so, so, so adore. My feet were out of commission by this time (blisters are not fun) and we got lost to get to the department store that was located literally a step from the station, but we made it. Maya and I actually lost each other on the crowded street but we reunited at the chocolate department of Liberty about 30 minutes later (we both somehow knew that we would end up here)!

After we shopped for about two hours at Liberty (let me rephrase – it should read “after I drooled over the fabrics and touched everything in the store”), we headed to the Italian restaurant across the street called Café Uno to rest before heading back to the hotel (I was at a point where I could not move another step). We initially decided to sit down for coffee only but we decided to eat dinner. Maya ordered Spaghetti Carabonara and I ordered Spaghetti Bolognese. After looking around, I remembered that I was at this exact restaurant in 2004, writing a postcard to Maya, wishing that she were there. Five years later, my dream had become a reality.

Despite my blisters and the frustration of getting lost on the streets of London, I was having the best time of my life with my best friend and soul sister. I love you, Maya!

3 thoughts on “The London Getaway”