I am in love with Paris. I am one of those tourists who is so smitten with the city, the people, the food, and the style, that this place pretty much can do no wrong. There is, however, one place that I don’t care too much for, and it’s the Champs-Elysees.

This stretch of the boulevard that is the home of world famous shops like Louis Vuitton and Laduree ending with picturesque Arc de Triomphe, is nothing more than a blood-sucking commerce with overpriced and pretentious cafes, ready to take tourists for their money.

I was incredibly weak that day. Although it was only me and Maya’s second day in Paris together, I already had extra four days and high mileage on me. My legs were already overly fatigued and painful by this time and I really needed a nice long rest once I got to the Champ Elysees, after a long day of sightseeing.

We stopped at the first café we saw called L’Alsace Champs Elysees, which turned out was the biggest bloodsucker of them all, with below average food and non-existence service. The lack of service part was not an issue for us (we, in fact, enjoyed that we were left alone) but we were extremely disappointed with the low quality of food, especially in Paris where food should be above par pretty much anywhere. And we even ordered dishes that this city is known for, in a bowl of French onion soup and fresh oysters!

The French Onion Soup was served luke warm, with not much of flavors or any of the things that make this highly complex soup extraordinary. Because the soup was already cold, the cheese had hardened and lost that lovely stretchy consistency that makes cheese, well, cheese. Chewing on that cheese felt like chewing a cheap bubble gum.

The raw oysters didn’t taste fresh either, and had the strange smell / odor that I hated. There are hardly any oysters that I disliked but I was only able to eat one and that was it. 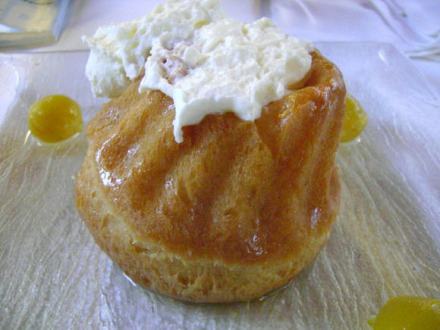 Baba au Rhum, a cake drenched in rum syrup made with rum, vanilla, and sugar, was actually quite good, although it was so strong that I almost got drunk off of it!

We ended up spending about two hours resting our tired feet at the restaurant and even though we willfully bent over and had the restaurant take advantage of us, we found a bit of pleasure in experiencing the pretentious side of Paris first hand.

At least at the end of the road was a beautiful Arc de Triomphe. 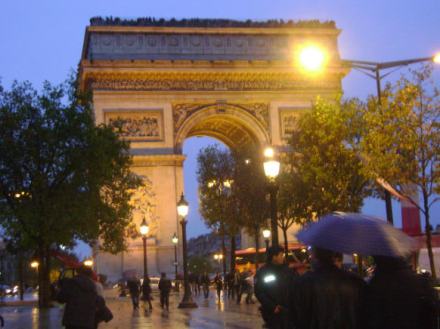