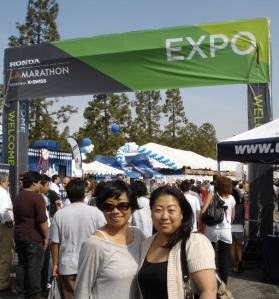 Last week’s Los Angeles marathon was such an amazing journey for me, perhaps the most memorable amongst the three previous races. The last three were marvelous too, of course, but this one was particularly significant for several reasons.

First and foremost, this was my sister and my first full marathon together. We didn’t run together during the race but we shared the stress before the race, and the celebration afterward. And thanks to her expert guidance, I was able to cross the finish line safe and completely blister free (this was a pleasant surprise, especially after I suffered a blister on my foot the size of Texas after my last marathon). We ran together a lot during our weekly personal training session and she corrected my form frequently. I have no doubt that that was the reason I was able to complete the race completely injury free!  I’m sending a big thank you and an even bigger congratulations to my sister for completing her first full marathon!

The second reason why this race meant so much was because I met my “marathon angel.” Let me explain. When I was at the starting line at Dodger’s Stadium waiting for the race to start, I met this gentleman and started up a conversation. He was a soft-spoken, kind man, in his 60s. We parted ways when the race began but we found each other at mile 6 and ran together for about seven miles. We pushed each other, cracked a few jokes along the way, and encouraged each other to keep going. At around Mile 16, I got the second wind of energy and he wanted to slow down the pace a bit, so we parted ways, promising to see each other at the finish line. Unfortunately, our paths didn’t cross again but I will always think of him as my marathon angel because I would have never been able to enjoy the run as much as I did without his presence. I searched for his results afterward and saw that he crossed the finish line about 10 minutes after me. I hope I run into him again at other local races someday so I can congratulate him, and thank him for his kindness. 🙂 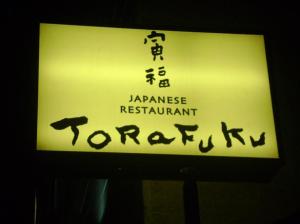 Last but not least … the carb load!  As you know, the marathon experience is never complete without a proper carb load the night before the race. After we went to the Expo to pick up our bibs, grab some freebies, and drive around the racecourse, my sister, friend N, and I headed over to Torafuku on Pico in Los Angeles (next to Westside Pavilion) to load up on its famous white rice cooked with an iron metal pot called “kamado.” I had not been here before but have heard the buzz around it for a while now so I was very excited to check the place out.

I knew I had to keep the dinner fairly light to be in the best condition for the next day’s race but when I saw the Fried Assortment of shrimp, katsu (pork tenderloin), and croquette, I had to have them (what marathon?).

The white rice was delightful. It was not sticky like the ones I was accustomed to, and each rice grain had a wonderful bite to it.  And the fried shrimp, pork, and croquette were perfectly golden, unbelievably crispy, not at all greasy.  We made our dinners into a combo by adding $6 and got a bowl of rice and miso soup in return.  It’s not a bad deal, considering I had just experienced one of the most delicious rice I’ve ever tasted! 🙂 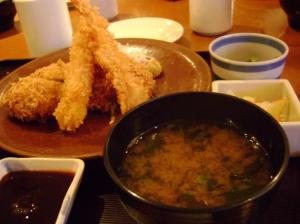 We all ended up ordering another bowl of rice each with dinner. My sister and I took a few rice balls to go to eat for breakfast the next day. They were pretty steep in price at about $5 each but I truly believe it was the salmon and mentaiko rice balls that gave me the bust of energy at the latter part of the race!