Perhaps no restaurant triggers more childhood memory than Benihana for me and my family. This Japanese teppanyaki giant used to be our go-to place for special occasions like birthdays and anniversaries for many years, until we grew up and realized how cheesy and tacky this whole over-the-top performance-based dining experience truly was.

It has been more than a decade since our last Benihana outing, and we decided to revisit our old stomping ground for my birthday this year – partly to walk down the memory lane and mostly as a big, fat joke. Oh, and because we had heard about the Chef’s Special, which offered Filet Mignon dinner with onion soup, salad, rice, and vegetable and shrimp appetizers, for two for $39.  Not a bad deal at all, actually.

Okay, I will admit … as much as I make fun of this joint for the pure corny-ness, I think there’s a part of me that takes enjoyment in this culinary guilty pleasure.  You can always find amusement in watching non-Japanese chefs try to say “teppan” without sounding like “tampon,” and you certainly have to give it up to those who make firing volcanoes by stacking onion rings.  I also chuckle a bit when they start spinning a knife with their fingers like a wannabe drummer in a rock band (although I sweat bullets praying that the cutlery won’t accidentally fly out of their hand and land on someone’s forehead).  The food is actually half decent, believe it or not, with pretty tasty onion soup and salad dressing.  I guess it’s difficult to mess up grilled meats and vegetables but the dishes are mostly very filling and satisfying.

Those days when we thought Benihana was the greatest Japanese import (followed by Tamagotchi) may be long gone now, but the time spent with family is always precious, timeless, priceless, and yes, delicious, wherever you may be. 🙂 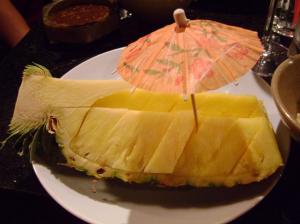