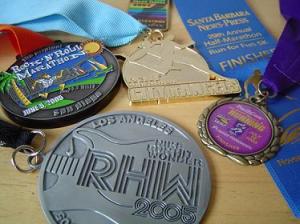 I am fascinated with running the way teenage girls are obsessed with becoming a cheerleader. I think about it all the time, daydream about running like a Kenyan, and I even find myself staring at runners as I drive by local parks or running tracks. I read a bunch of running and marathon books and I even watch high school track meets on television. Then why is it that, with such deep admiration I have for the sport, I still have difficulty putting on a pair of Asics and hitting the pavement? Perhaps it’s the “idea” of running that I am in love with, and not the actual, physical aspect of the sport. Or maybe it’s just pure laziness (oh my gosh, had I turned into one of those annoyingly gluttonous sports fans who scream at the TV screen while sitting around on the couch with a bucket of hot wings?). Whatever the reason, it is about to change! 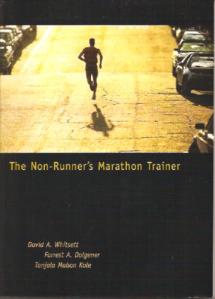 I made a commitment to finally turn my running life around by sticking to a regular training program to ready myself for the Los Angeles Marathon in March. This time, it’s for real. No more lame excuses on why I can’t get my lazy butt off the couch. I’m going to do this, and I’ve decided to cherish the journey along the way. I suppose I’m one of the few people who does this in reverse. While people make the commitment first and train for the marathon, I completed the marathon and made a commitment. I think running the marathon in Portland earlier this month made me respect the race even more, and made me fall in love like I never thought I could.

The training I selected is based on the book, The Non-Runner’s Marathon Trainer, written by three coaches who teach a highly successful 16-week marathon class at University of Northern Iowa. I’ve had this book for a while and after sampling other books and marathon programs for beginners, I found this to be the most appropriate for my physical level. The book is a little text heavy but it contains valuable information about training your mind and body for the 26.2-mile run.

To kick-start my new found commitment, I participated in Nike Human 10K Race last weekend, running around the USC campus at midnight with thousands of other insane runners in Los Angeles. The race was particularly enjoyable because I got to run with 20 or so of my sister’s running friends who were very kind, welcoming and full of endorphin-charged energy! I had a strong 6.2-mile run and afterward, a group of us went out for a very late supper at Hodori, an all-night Korean diner on Olympic and Vermont, to celebrate our recent accomplishments. 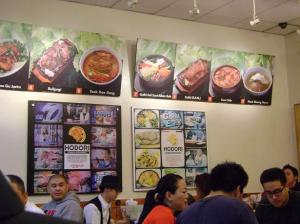 It has been more than a decade since my crazy days of partying until a crack of dawn and dashing to Fred’s or Canter’s to recover from excess drinking, but sitting at a diner at 3:00 a.m. surrounded by a bunch of boys and girls reminded me of the good old days as a wee 20-something. I think it’ll be another 10 years until I would be out this late again, but it certainly made me feel a little young at heart!

Who needs a cup of coffee to keep you awake when you have spicy plates of banchan to provide some kick?

Dumplings and Rice Cakes in Beef Broth for me … delicious 🙂 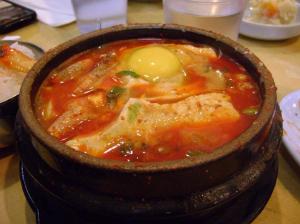 Spicy Soft Tofu — like chicken soup for a tired (and sleepy) body!

If nothing else, delicious food after a run should motivate me to commit to running. My new motto in life should be, “I eat, therefore, I run.” 😆