Last weekend was a total chick flick extravaganza for me, indulging in movies like Confessions of a Shopaholic, Bride Wars and He’s Just Not That Into You, with my boyfriend (who slept through most of them

) and gallons of frozen yogurt beside me. Of the three, the only movie that impressed me was Bride Wars (the other two were awful). I will admit that the movie was super predictable — as in most chick flicks — but Anne Hathaway and Kate Hudson were so darn adorable that you just have to roll over and laugh!

It was appropriate, especially after the chick flick overdose, that my sister, my mother and I took my father to a local Korean BBQ to celebrate Father’s Day on Sunday. I felt like the visit to the carnivore’s mecca offset the girlie-ness of the previous nights. I’m telling you — eating Korean BBQ totally makes me want to go hunting and gathering, and even grow chest hair. It’s extremely soul satisfying and unbelievable meaty, and I certainly don’t smell like a lady after consuming all that garlic!

My family has been coming to this Korean BBQ restaurant in Canoga Park for years – even before it was named Il Auk Jo. When we first discovered this place more than 10 years ago, it was just a wee joint, small, dinky but with the most delicious banchan and marinated meat around. The then-owner was this wonderful little Korean lady who always stopped by our table to greet us and bring us napkins. We always looked forward to seeing her smile that extended from ear to ear. 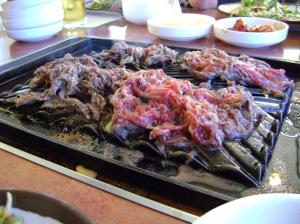 The place has since changed and the restaurant, despite renovation and expansion, is now a shadow of its former glory.  The food is still pretty good although not as good as before, we still enjoy coming here nonetheless, on special occasions like the Father’s Day to reminiscent about the memories of the yesteryear.  We love sharing stories on how excited our beloved dog now in heaven, Jasmine, got when we brought home the leftover calbi and beef bones whenever we dine here.  I wish you can see it – her happy dance was absolutely hilarious!

By the way, we ordered our usual again — bulgoki, calbi and spicy pork.  We ordered plates and plates of kimchi and banchan — so much so that our waiter disappeared after a while, probably in fear that we will eat up all the banchan they had! (From looking at the picture here on right, you can probably imagine how horribly I wanted the meat to cook  on the hot grill so that I can dive into them!)

I hope all the wonderful fathers out there had a fun Father’s Day! And to my fabulous dad — you are the best father EVER! We love you so, so much.

Updated on November 6, 2011: To celebrate my parents’ 41st anniversary, the family headed over to Il Auk Jo for some good Korean BBQ fun, only to find out that restaurant had closed. Boooo! Luckily, there was Grandma Kim’s not that far away (on the corner of Topanga Canyon and Roscoe in Canoga Park) so we got our fix, but still … we’ve been going to this place for like 15 years!  It’s like our old friend has moved away.  Another local establishment bites the dust.