My colleague P and I landed in Denver safely on Saturday morning after surviving a very scary shuttle ride to LAX, where the driver from Super Shuttle was nearly falling asleep behind the wheel 👿 Granted it was 3:30 a.m. when we got picked up, but he has no excuse to put anyone in harms way (you have one angry, strongly-worded letter coming your way, mister!). The plane ride, on the other hand, was peaceful as I was able to fall asleep soon after takeoff. P, however, wasn’t as lucky and she had to deal with a little kid kicking her seat for the duration of the flight (you know how annoying that can be!). It was a bit of a rocky start to the Mile High City but we’re just happy that we are finally here!

We, along with five other trainers from the team, will make Denver our home away from home for the next seven days. We are here to launch an onboarding program that we worked so hard to create. When I first accept this job back in March, I promised management that I will give up sleep for the next three months and I think they took it quite literally. But there’s nothing to complain here because what I learned in the mere few months is more valuable and meaningful than what I learned in years. 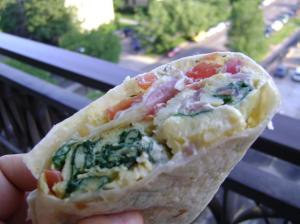 With a vegetarian breakfast burrito and a glass of cranberry juice from The Burnsley Hotel in my stomach (eggs, spinach, tomato, onion and herb cream cheese), I am ready to go! The breakfast tastes even better with the picturesque Downtown Denver in the backdrop.