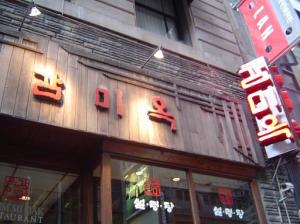 While looking through my trusted guidebook trying to figure out what to eat for dinner, I came across Gam Mee Ok in New York’s Koreatown on 32nd Street that received some impressive reviews on its Sul Lung Tang, a milky soup made from cooking ox bones for many hours. Although I had never heard of the dish before, I wanted to give it a try since it sounded like an ideal dish to settle my tired stomach after overdosing on meat in Brazil. 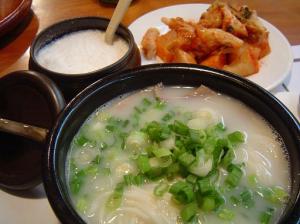 It was only a short, 10-block walk to the restaurant from the hotel, and when I got there, I noticed that everyone – and I mean EVERYONE– was enjoying Sul Lung Tang and nothing else, despite the fact that it did offer other Korean staples like Bibim Bap and Bulgogi. I knew then that this soup has got to be delicious.

And delicious it was. When you first get the soup, it comes completely unseasoned. Only flavor you taste is the rich, deep flavor of the broth made of bones — very similar to the milky consistency of the tonkotsu ramen broth. You can season the soup with salt and pepper, and sprinkle some scallions for added richness. Every sip was divine and heavenly, and the noodle and rice inside the soup was hearty enough to satisfy even the hungriest souls. 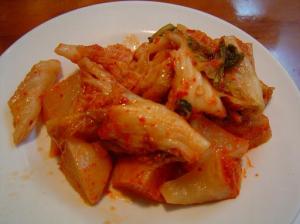 The plate of kimchi that accompanied the soup was as impressive. It had the distinct sourness that only comes from fermenting the napa cabbage masterfully, and the spiciness truly complimented the simple but robust flavor of Sul Lung Tang.

I’d better look for a restaurant that serves as good a Sul Lung Tang in Los Angeles before I start experiencing some serious withdrawals!