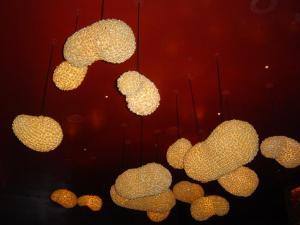 (Excuse me, may we eat these peanuts? We’re still hungry.)

My mother always told me that Japanese food is meant to be savored with the eyes first, then the stomach. She certainly practices what she preaches because everything she prepares (even a little bento box she packs for father daily) is vibrant, playful and charming — a total visual and gastronomic treat.

My pals and I — craving something new and interesting – made a trip over the hill to check out the buzz surrounding Nobu in Los Angeles.  Located only a few blocks from the original restaurant that started the sushi revolution in Los Angeles, Nobu is the newest member of the Matstuhisa empire — and a perfect epicurean getaway for us foodies looking for a little fun in the city … or so we had hoped.

We ordered several dishes to share as suggested by our server, and when plates arrived to our table one by one, I remembered the wise words of my mother.  Dishes at Nobu were definitely a feast to the eyes.  Just a quick glance at the beautiful Toro Tartar that resembled an abstract artwork proves the pride chefs put into presentation.

However, what Nobu forgot was the second part of the philosophy, that it should also be enjoyed with the stomach. I understand that the majority of the clienteles in a trendy restaurant like Nobu are size 2 models and actresses, but are you kidding me?  These dishes were way too tiny!  Especially for the price we’re dishing out for these plates, we would have loved to see something with a little more substance, than just a sprinkle of chopped fish for a full order of ceviche. We ended up ordering a couple bowls of steamed rice just so that we didn’t have to make a beeline to a nearby fast food drive thru after dinner.  I was even tempted to eat those peanut-looking lights hanging from the ceiling! 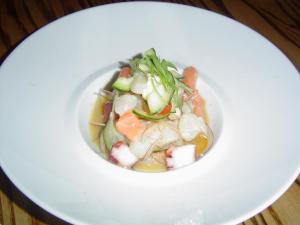 King Crab Tempura with Amazu Ponzu Sauce (the best dish of the night!)

Mixed Vegetable with Truffle Butter (the only dish with real substance, I thought.)

Make no mistake about it – everything served at Nobu is fresh, tasty and fabulous, and the service is absolutely out of this world (I think there were more servers than customers there!).  And Nobu Matsuhisa is pretty much a culinary God.  His ability to use traditional Japanese ingredients like yuzu and mixing it up with South American (Peruvian) touches like jalapeno is nothing less than magical.  However, the magic was lost a bit by an unsatisfactory portion. Maybe it’s just me, that I don’t have much of an appreciation for trendy, pretentious, anorexic-portion-serving dining spots, but I think I would choose the generous portion of my mom’s bento box over this fancy meals any day, thank you very much.