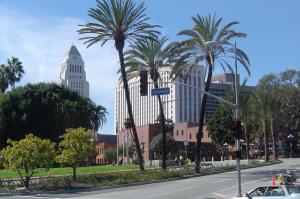 A couple of friends and I participated in the Los Angeles Chinatown Firecracker 10K Run a few weeks ago — an event that was a part of the week-long Chinese New Year celebration. The race began at the heart of Chinatown, then up the hills through Elysian Park and Dodgers Stadium and back to Chinatown for the picture-perfect finish. This was such a wonderful and a rare opportunity to travel the streets of Los Angeles on foot. The view of Downtown LA skyscrapers in the smog-free morning was serene and breathtaking.

I love these local running races and I try to participate in them as much as time (or money, these things aren’t cheap!) allows, but running and I have this strange, love-and-hate relationship. I guess the “hate“ part is the actual motion of putting one foot in front of the other (yep, running is evil), and the “love” part is being able to collect finisher’s medals and cool freebies. I suppose the bragging right you earn by finishing a longer-distance run is pretty good too, although I never reveal to people that I actually crawl my way to the finish line. My boyfriend volunteered one day to buy me a calendar instead of a stop watch … and I don’t think he was joking.

Well, every run is an agonizing experience but a guilt-free lunch that follows immediately after makes every minute of pain worth it (okay, maybe not every minute … maybe two). And this day was no exception.

Although we were in the heart of Chinatown that day, we decided to walk down a couple blocks to sample some Filipino food at Asian Noodle — a cute little establishment with a cafe or an art studio-esque decor. To tell you the truth, I’ve never been much of a South East Asian cuisines fan, and never placed Vietnamese, Thai or Filipino food on top of my “must eat” list. I’m not sure exactly what turns me off from them … maybe I’m not too crazy about cilantro/basil/lemongrass-laden dishes. But I was pleasantly surprised at the firecracker of flavors I experienced at Asian Noodle. Sure, there were some entrees that we ordered that I wasn’t too goo-goo-ga-ga over, but there were a few that I absolutely fell head-over-heels for, like the garlic rice. It was such a simple dish — rice sauteed with chopped garlic — but the flavors had so much depth. The silver noodle was also quite delicious, with chicken and cabbage adding the nice crunch. My apologies – because of my lack of knowledge on the Filipino cuisine, I can’t recall what each dish was called, but here’s what we ordered. If you’re a fan of pungent flavors of lemongrass and other powerful herbs and spices, this place will surely satisfy your SE Asian cravings. 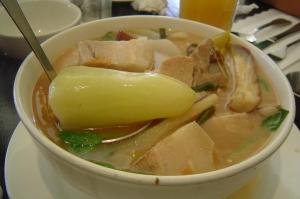 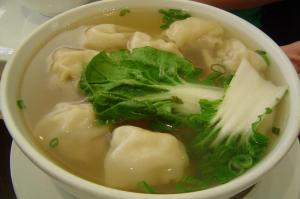 I think our eyes were much bigger than our stomach that day. Between the five of us, we ordered enough food to feed the entire Chinatown and then some. I guess that’s what happens after a good workout — you “think” you’re really hungry but your body is actually too tired to digest. But the combination of sweet, sour and spicy flavors of the Filipino dishes really awakened my senses and, after a couple sips of the delicious lemongrass soup, I was back to my usual hungry self.