There’s an old Japanese proverb that says that, “stupid people don’t catch cold.” WTF? Well, I’m assuming that it means that active kids who played outside are typically more intellectually inept than those who stayed home and … read or something. Naturally, the latter would build up enough tolerance to fight cooties from being outside, thus making them unlikely to get sick.  I think I can credit my insecurities as a youth to this saying because I was one of those kids who never, ever got sick and because of that I always believed that I was stupid.

Well, either the proverb was proven to be full of shit (yeah) or I’m becoming smarter (neh), but I’ve been susceptible to cooties lately. This “turning 30” thing has really wreak havoc on my system, I tell you. For example, it takes me at least three days to recover from one night of wild fun (and by this, I mean going to a 10:00 p.m. movie), and forget losing weight. My ass gets bigger just by thinking about sweets. But what’s more frustrating than anything is that I get sick now just by walking past someone who’s coughing!  What is all that about?!?

After suffering this nasty cold for nearly a week, I finally felt good enough to get myself out of bed today and do something I’ve been wanted to do for weeks — baking. 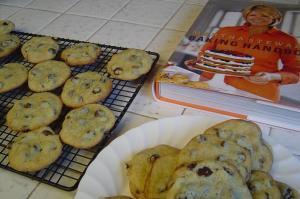 I didn’t want to do anything intricate so I went for the good old chocolate chip cookies, which give me enough satisfaction while providing guarantee results. I’ve tried many chocolate chip cookie recipes in the past but my favorites came down to  ① the recipe on the back of the Nestle chocolate chips, and ② Martha Stewart’s.
Although I wouldn’t call myself a fan of hers (she’s kinda scary), Martha Stewart’s Baking Handbook is actually one of my favorite cookbooks. Everything that I’ve tried from this book has been successful, and I like the way the instructions are written. I used her recipe this time and the cookies certainly satisfied my sweet tooth.  This particular recipe called for more butter and less flour so the results were more crisp and less chewy, and I loved them.

Nothing cures cold better than a couple (or a dozen) of no frill, no nonsense homemade cookies, for sure.  Maybe I’ll save some for Santa too.