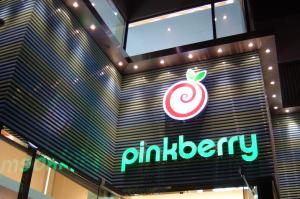 Saturday night … out with the girls … and waiting in a long line just to get in to the hot spot in Los Angeles. But unlike the good old days of getting all dressed up and waiting to get into a hot nightclub, we were instead waiting in line of at least 20 people deep at 9:30 p.m. to get a bite of an unbelievably refreshing frozen yogurt from Pinkberry.

I think people either love this place for the mouth-watering flavor of the frozen yogurt that tastes more like real yogurt than the traditional kind, or hate it because its popularity has gotten a bit out of hand. I, myself, belong to the former group of Pinkberry minions, and my heart beats in delight every time I see the brightly-lit pink swirly logo. 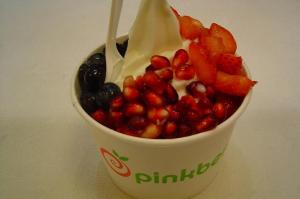 Well, there’s really not much that hasn’t already been said about this place so I won’t say much other than to state that I love it. I tried the pomegranate topping for the first time, along with strawberries and blueberries, and it was absolutely jaw-dropping good. What a way to welcome the arrival of autumn.

The reason why this place works is because it provides people with the “third place,” a place for people to meet and hang out outside of home and work  — the way that Starbucks became a mega success. It’s very smart that Starbuck’s Howard Shultz is now a part of the fro-yo phenomenon because Pinkberry would have given the coffee giant a little, friendly competition.